Hey Steffen, how is everything, what are you up to?

Hey Nico, everything is alright. I am hanging out here in Austria, at the Ausee at my Girlfriends Place enjoying the hottest summer ever! 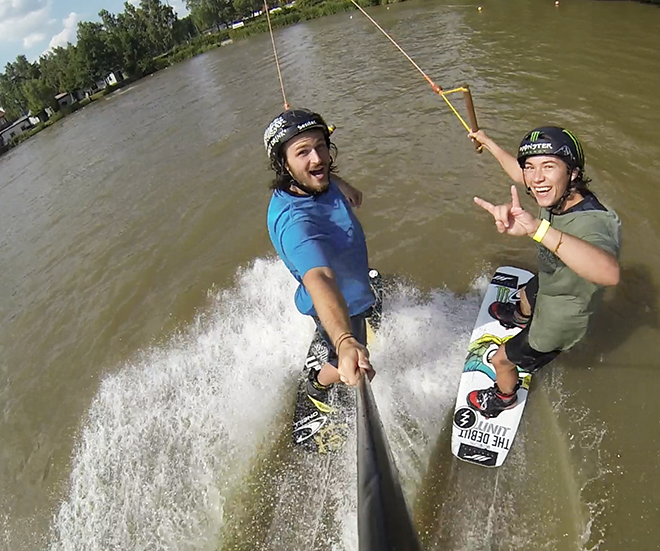 This year you moved back to your original homespot Thulba. How was renovating the apartment you and your brother share?

Renovating was fun but it took longer than we expectet. We started this whole project in January and planned on moving in in mid – March. But in the end it took us 6 more months to have the apartment ready to move in. Even until today it s not finished yet! All in all it was so much fun and when you look at all these things you made with your own hands; it makes you really proud. But the best experience was to work together with my grandparents, who own the house the apartment is in. They were so happy that finally something is happening there and they taught us so much stuff. After that I can say that I could build my own house.

Haha nice! Yeah the brick wall you built for the shower looked nice and straight! What does it mean to you to live back home again?

After a few years in Duisburg / The Bricks it was time to come home to my family and the Cable my heart belongs to. Tobi Rittig, the owner of the Thulba WakePark, did an amazing job the last years and really made it to one of the world’s sickest Rail Parks. It’s a shame that this era will come to an end in 2015. The owner will change again and I have heard about plans thatmost of the rails will be removed and it will become a “family friendly waterski cable”, and that really sucks! It has always been the Nr.1 spot for me, but I hope that it’ll still be after all that! So everybody out there, if you are somewhere in Germany, take the chance, go there for a ride and enjoy!

It definitely is one of the best parks!

Even though you have this new apartment I feel like you have stayed at your girlfriend’s place more than you have slept in your new bed, is that right?

Yep, that’s right. It really feels like a second home for me. I m riding a lot at the cable close where she lives and i get involved a lot too.On really hot days if the queue gets really long I help out operating and coaching on their System2.0, what I enjoy a lot!

You are one of the wakeboarders always thinking about new things you could do. Tell me about the camps you do for O’Neill.

I always try to find projects together with my sponsors where I can be involved a lot. Back in the days O’Neill had the “Wake Academy” and it was about time to continue this success. Last year we had one Camp in Langenfeld which turned out perfect. This year we had Camps with 20 participants in Pinneberg, Thannhausen and Langenfeld. I didnt really know what to expect and how I should treat teammates/coaches as their “boss”. But I got along with it pretty quickly. Everybody loved the Camps and made huge progress and I can tell already that we have even bigger plans for next year!

When you are not riding you are most likely taking photos or you are filming. I feel like you got really good in both. Do you prefer one to the other?

Is that something you want to do more and more? Well, I wish I had more chances to shoot other pros, to get better in shooting and finally get my flashing dialed in! I still have so much to learn and I am just at the beginning. Right now I prefer to shoot photos because it’s less effort in the editing afterwards. Thats why I’m shooting video mainly with my GoPro. That’s the easiest and funniest way to get footage of me and my friends riding together.

It is for sure! I guess we need a little bit more footage, but then should be alright to bring out another good Thulba edit of us two soon. By the way, do you want to edit it?

If you want it to be superdupa mega amazingly superlativly sick? For sure! what are your favorite songs for the edit?

Ah, music is always a tough one… Ever thought of doing a camp where you teach riding as well as taking photos of wakeboarding?

You should suggest this to the real professional photographers; I’ll be the first to sign in!

What does it feel like to be on both sides of the lens?

Mainly its a lot of fun. Being in front of the lens for a few years helps me a lot how to act behind the camera and how to communicate with the rider I shoot. To know whats going on on each side taught me a lot for the other way around!

No one does those half-loads better than him. Massive melon grab.

To come back to your roots. You started waterskiiing, and soon were one of the first groms trying his best at contests. Any memorable stories from that time?

There were dozents of memorable moments. But what i am really proud of and i always tell everybody was my trip to the European Championships in 2002. Sitting next to all the Pros , like Flo Meeh, Benny Süß and Hardy Tunnisen, little 15 year old Steffen was on a roadtrip from Austria to Hungary, trying to show his best at his biggest contest ever! Dude. I was soo stoked! It was the best feeling ever to be part of the crew I was always looking up to. It was one of the best trips ever. But what really exceeds every single moment in my carreer was the moment when i checked into the course with a huge switch blindjudge. Dude. I was 15! HAHA

Soon you became one of the riders with a signature board with the German company New Schnitzel. I think your board was the one with the Bomb on it? What did the New Schnitzel time mean to you?

Common. I was the gunman! I mean NewSchnitzel was my first sponsor ever and they definitely gave me right directions to get there where i am today. Rest in peace NewSchnitzel!

Oops, true, you were the gunman haha. Today you are riding for Slingshot, and I feel like you have been involved a lot, right?

Joining the Slingshot team was the best thing that has ever happened to me. Everything they do fits me perfectly and I guess what I do fits them. Being a part of an amazing team makes me proud because that’s what I have ever dreamed of and one of my main goals. What makes it so special to ride for Slingshot is that you are a part of a Team and not just a rider behind that main teamrider in some kind of a ranking. Jeff McKee does a great job and it’s so much fun to hang out with everyone of them.

Sounds like perfect support! Speaking of support, when you did your military service you became one of the few guys supported as an athlete. Did that help you for your wakeboardig?

I was really lucky and i took the chance to get out of my job to make new experiences. the first few month i was a “real” soldier and the last 14 month of my military service i had the chance to focus a 100% on my dream. Becoming a professional wakeboarder.

Because of a knee injury I was rejected from military service and think I was quite lucky. Nevertheless I guess you have some funny stories or experiences from that time during your basic military training?

Man. you missed out soo much cool stuff! the training at the beginning of my service was really hard and showed my limits. the time after this was mainly hanging out waiting for work. shooting guns. playing enemy in urban militairy fighting. That whole militairy experience was really interestig and i dont want to miss out any moment!

What are you up to the next few weeks?

We just had the last one of the O’Neill Camps in Langenfeld, it was so much fun. Next weekend Relentless Energy invited me to the Rockenheim festival. This will be really exciting because it s my first festival ever! Ill put on my #rbrh denimvest for sure! Surfexpo and worlds in abudhabi will follow up too. And a long afterseason with 4 stops of the world tour will end the season! Yeah exciting!

Always busy… thanks a lot for your time and see you soon!

Thanks..   yeah, don’t forget we gotta talk about that secret project some more

talk to you soon.

Check this video out that Steffen just uploaded. You can tell how creative and motivated he is when it comes to filming. This one is mainly done with his self-made helmet mount.